WAN-IFRA’s 27th annual conference in India, WAN-IFRA India 2019, was held in Gurugram, Delhi, with over 340 news publishing executives from over 25 countries, discussing and tracing the transformation of the news media business. The conference, held from 18 to 19 September 2019 at Leela Ambience Hotel, Gurugram, was co-sponsored by The Indian Newspaper Society. The conference had two parallel summits – the Advertising Summit for advertising managers and the Printing Summit for printing technology managers.

MacLeod talked about technology innovations and business transformation experiences at Tiso Blackstar Group. “Tiso Blackstar has built its own content management system and has reduced the number of editions. We have trimmed down our print costs. Our reporting staff now starts early in the day to file reports for the web. Paid content is our primary focus and we have six operational paywalls,” MacLeod said.

She also mentioned that the data cost for mobile phones is about six times higher than that in Europe and South Africans spend more on communication than on health or education. “To serve this large chunk of our audience who cannot afford data, we have created an app that does not need data to run. SA News Live is powered by free content from all our newsrooms,” McLeod said.

Fernandez discussed extending the life of the printed product while gearing up for a digital-first newsroom and the transformation. He said, “We looked at global newsrooms but figured replication was not an option. We needed to understand our audience. We don’t like to call ourselves a digital-first newsroom; print and digital both play an important part for us”.

Jain talked about the print business in India and how it is a flag-bearer of responsible journalism. “It doesn’t leave much room for sensationalism and out of context reporting,” said Jain. In the last few years, while print has fought for survival globally, it has thrived in India. It, however, has also faced challenges. “The habit of reading the newspaper in the morning is being threatened by digital notifications and multimedia. Print has to be its own innovator and disrupter in the new world,” added Jain.

The WAN-IFRA  conference started with a workshop on combating misinformation, by Pratik Sinha, co-founder of Alt News, on 17 September as a precursor to the event. The two-day workshop covered a host of tools to fight fake news such as video and image verification, writing a convincing fact-check, search strategies for different platforms among others.

Over 25 suppliers from both, India and abroad, participated in the foyer expo, displaying their products and services for the newspaper printing and publishing industry.

The event concluded on 19 September with a panel discussion by chief executive officers of leading news media organizations including Jayant Mammen Mathew, executive director of Malayala Manorama, Pawan Agarwal, deputy managing director, DB Corp, and Sanjay Gupta, editor and chief executive officer, Jagran Prakashan. The panel discussed the challenges and opportunities of print and how its life can be extended. Post the conference, a visit to The Times of India printing plant in Manesar was organized for the delegates. 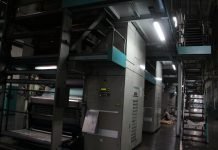