Journalist Krishna Prasad interviewed Barber after the recent launch of his new
book The Powerful and the Damned. The interview also touched upon topics such as
the current Covid-19 crisis, demonetization, and the importance of news. Barber
also spoke of his mentors Harold Evans (Sunday Times) and Ben Bradlee (The
Washington Post); and his father’s powerful contribution to his career in journalism.

Barber served a tenure of 15 years from 2005-2020 as the editor of the Financial
Times. He was a reporter and foreign correspondent before taking up the chair as
editor of the London-based financial newspaper. 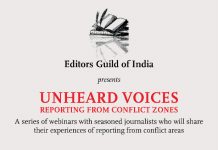