Founded in 2002 in Israel, Kornit Digital is a developer and manufacturer of digital printing technologies for the garment, apparel and textile industries. It supplies its inkjet machines across 100 countries addressing the needs of designers, manufacturers and vendors across the textile printing value chain.

We had an opportunity to meet Andy Yarrow, president of Kornit Digital’s Asia Pacific region, at the recent Shift_19 event in New Delhi, where he presented some of the global trends and opportunities in the textile industry. Current megatrends (trends that keep growing with time) in the fashion industry are influencing the textile printing industry. These include the personal expressive attitude of millennials, the influence of social media on fashion choices, the rising popularity of eCommerce and growing awareness towards sustainability.

According to Yarrow, around 74% of millennials love personalized apparel and are willing to pay 20% more for it. Also, social media has come a long way from a communication medium to one that influences fashion choices. Approximately 46% of consumers derive their fashion ideas from social media platforms such as Instagram. Social media can also be held responsible for the decline in the newspaper and the maganize industry.

At the same time, the ultra-fast business model of online shopping has led to a meltdown of traditional retail. Retailers are shutting down their stores due to the stagnancy of their sales and this phenomenon does not spare luxury brands either. Yarrow illustrates this point by giving the example of popular fashion apparel brand H&M, which burned around US$ 4.3 billion of its unsold clothes in 2018.

Yarrow shared some interesting insights into Kornit’s business and unique technology. “Kornit’s business is divided in two facets – direct-to-garment printing that helped Kornit make its market presence and direct to fabric (roll to roll) printing,” he says. “Many people who move on to textile printing think of dye sublimation, a process of printing via transferring on paper. But our way of printing is different. We lay down a fixation agent and while it is wet, we lay down the ink on top of the fixation agent and then cure it. Images and text are directly jetted on the garment, which is then laid down on a conveyer belt dryer which cures the ink at 150 degrees. But for rolls of textile, we have an inbuilt heat system,” he explains.

Kornit conducts its business across the world through its business partners. The company has distributors across the Asia Pacific and in their partner in India, Arrow Digital, based in Ahmedabad, has a national presence. Yarrow explains, “We have at least one channel distributor in every country to conduct our business since it is very expensive to set up operations all over the world.” Yarrow operates the regional headquarter in Hong Kong where Kornit also has a substantial customer experience center. The company also has an office in Shanghai and an office and demonstration facilities in Dusseldorf for its European business, and an office and experience center in New Jersey to support the US business. Kornit’s global business was $142.4 million in 2018, with Asia being approximately 10% of that. The company is targeting growth to $500m in the next 5 years, with Asia likely to be 20% of the overall number by that time.

Speaking about the challenges involved in expanding Kornit’s presence in India, Yarrow says, “We can’t necessarily do that by doing business through distributors so we will target markets directly, one at a time. But right now we are in the position in Asia to go direct in the market because in a vast country like India with huge cities and dense population, for us to have a presence here, we need people in Mumbai, Delhi, Bengaluru, and Ahmedabad. We need at least five engineers and we don’t have the number of systems to justify those people, which will hamper our customer service. But in a growing, dynamic and diverse market like India with a huge textile base, we need to figure out a way of doing it at a lower cost and in an efficient manner. We also need service personnel locally and while eventually, this may be possible, it’s not, right now.”

It was Yarrow’s second visit to India this year and he has been to the country more than 20 times in the last 5 years. Comparing the Indian market to the rest of the Asian market, he says, “It is a really difficult comparison to make. What I love about Asia is that the market is so diverse; every single country is different than that next but also has some similarities. In places like Japan, people are more focused on quality; it is expensive to have screen printers because of expensive labor costs in Japan. But my biggest customer has 930 screen printers and that is an incredible amount of volumes because Japan is a huge market and they have customers who pay for quality and it makes more sense to do it digitally. Meanwhile, it is cheaper to set up screen printers in India. And India is incredibly advanced in technology with interesting online behavior and that is where we see our opportunities. There is no correlation between the two countries. Similarly, there is no correlation between India and western Europe.”

Yarrow further says that in India, people are environmentally aware, the middle class is rising, and incomes are rising more quickly than in the rest of the world. “People want to make sure they are socially responsible, so as a result run lengths are getting shorter because people demand different things; they don’t want to be same as everybody else. They don’t want pollution, which creates new opportunities for digital. And whether it is short run for commercial, or signage or textile or packaging, the market will set the trend. I genuinely believe that is because of the amazingly dynamic nature of the Indian market,” he concludes. 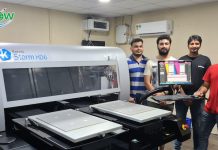