Among the four orders from India, RMGT’s important client, Progressive Printing Press based in Surat, India, installed the first 924(4-D) in August 2015, the second

920ST-4+IR+OC+SLD in November 2016, and the third 760ST-5XL in May 2017, replacing its existing Komori Lithrone 440 press. The company mainly prints brochures of Indian national costumes. Based on their experience of Provin’s professional and technical support and printing production efficiency of RMGT presses, they have decided to purchase their fourth RMGT press, 790ST-4XL+IR+OC+SLD in April 2019.

Progressive invested in RMGT presses within the last 4-5 years with expectations of increased printing productivity. The company was awarded as the most successful small-medium printing enterprise in India, in 2017. Currently, Progressive is listed among the top 100 largest printing companies in India. 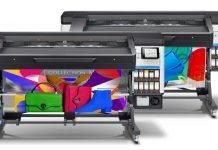