The annual general meeting of Delhi Printers’ Association was held at Malviya Smriti Bhawan on 27 April 2019. Despite the city’s scorching heat, member attendance surpassed all expectations. Rajesh Sardana, president of Delhi Printers’ Association, welcomed the members to the AGM and thanked them for the honor given and the confidence reposed in him and his colleagues in the executive body by unanimously electing them for the 2018-2019 term. He also thanked the members for extending their valuable cooperation and suggestions, which encouraged him and his team to achieve the targets. He said that details of the events organized by DPA during the outgoing year would be read out by the general secretary. Sardana also expressed his gratitude not only to his colleague office bearers, EC members and staff, but also to senior former presidents for all their support, blessings and valuable guidance from time to time. Presenting his annual report of DPA’s activities during 2018-2019, the general secretary Mahinder Budhiraja read out details of the various important activities, which included hosting the 242 GC meeting of All India Federation of Master Printers at Pride Plaza Hotel on 29 September and 30 September 2019 and the Printers’ Day on 24 February 2019. Expressing approval of the report, the members congratulated the outgoing team for achieving their goals. This was followed by the treasurer Kewal Krishan Singhal presenting the audited statement of accounts for the year 2017-2018, which was found satisfactory and was also adopted unanimously.

On behalf of former presidents, Vijay Mohan congratulated the outgoing executive committee on successful completion of its term under the leadership of Sardana and lauded their achievements. He hoped that the incoming newly elected executive body would endeavor to do better and set higher benchmarks. In recognition of the outstanding services rendered by the outgoing president Sardana, the newly elected president Mahinder Budhiraja and senior former presidents honored him with a shawl as well as a memento.

Referring to the 242 GC Meeting of AIFMP, Mohan said that DPA’s candidate Sunil Jain had been elected as vice-president (North) but the association had not felicitated him so far. Therefore, he requested Sardana to honor Sunil Jain by presenting to him a special gift as a memento.

Mohan hailed the vice-president of DPA and corporator of East Delhi Municipal Corporation Ajay Sharma on his being elected as a member of the standing committee of EDMC. He expressed confidence that Sharma would continue to extend his support to the cause of Delhi’s printing fraternity.

Sardana adjourned the meeting and invited the co-returning officer Raj Kumar Arya to the dais to announce results of the unanimous election of DPA for the 2019-2020 term. Arya read out names of the newly elected members of the executive body and congratulated them. Amid thunderous applause the new team was welcomed with garlands and hugs.

The AGM was followed by a powerpoint presentation made by Yes Bank, the sponsor of the event. The bank’s specialized team for printing industry explained the bank’s schemes for financial support to member printers and also answered the different queries of the audience. The day ended with high tea. 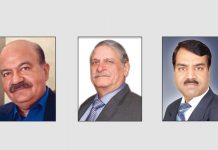