The World Media Group has unveiled the shortlist for the 2018 World Media Awards, revealing the world’s best content-driven, cross-border advertising campaigns. The Awards attracted interest from across the globe, with entries coming in from Austria, Botswana, Canada, Finland, Malta, the Netherlands, Israel, Pakistan and the USA amongst many others – targeting global audiences in APAC, EMEA, LATAM and the Americas.

This year saw a record number of entries, up 150% since their launch three years ago, competing across eight categories. The shortlist includes entries from a broader spectrum of sectors and organizations than ever before, with brands such as Porsche, the International Association of Athletics Federations, UK DIT (UK Department for International Trade), HSBC and Tiffany & Co making the grade this year.

According to Rudaizky, “This year there have been fantastic entries from around the world, with many showing that great things happen when brands, agencies and the media collaborate. It has been inspiring to see such great storytelling across all platforms but particularly exciting for me has been to see those entries that have pushed the boundaries of technology and creativity in content through gaming and VR.”

Emma Winchurch-Beale, international sales director at The Washington Post and president of the World Media Group, adds, “For the World Media Group great journalism and excellent writing, using authentic voices from around the world, are at the heart of what we do.  It’s therefore really exciting to see the same values and qualities also reflected in this year’s entries. Both traditional and non-traditional brands have now recognised how powerful content can be for engaging with international audiences.”

The final category winners will be announced at the exclusive World Media Awards Reception at the Ham Yard Hotel in London on Thursday 22nd March. The winner of this year’s prestigious Grand Prix Award will also be announced on the night, joining previous years’ Grand Prix winners, London & Partners and Tata Motors, as the ‘best of the best’.  All shortlisted entrants will receive three free tickets to join the celebration as guests of the World Media Group, and additional tickets are now available for purchase at https://www.eiseverywhere.com/wma2018.

In addition to receiving a prestigious World Media Awards trophy on the night, all the winners will see their work celebrated in an advertising campaign valued at € 500K, which will run across the World Media Group’s leading international media brands: The Washington Post, The Wall Street Journal, Time, The New York Times, National Geographic, Fortune, Forbes, The Economist and the Bloomberg Media Group. 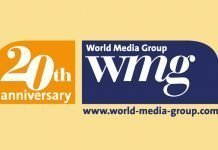