The media and entertainment (M&E) sector in India is projected to see a significant decline of 20% in total revenues in FY2021, with deep cuts in print and films, followed by television, on account of Covid-19 disruption, according to a report published by KPMG on September 30.

With the global pandemic outbreak, India announced stringent measures to combat Covid-19 in March 2020 and headed into a long phase of lockdown. This led to pressure on supply chains, manufacturing, consumption and incomes as economic activity came to a halt and unemployment rose. As a result, India posted a steep 23.9% decline in GDP in Q1FY2021 as consumer spending and investments dried up.

In FY2021, the digital consumption segments, that is, digital (including OTT video) and online gaming are expected to be silver linings, with digital consumption across the board having seen a significant upswing owing to people working from home. While advertising revenues on digital have been impacted from last year’s hyper-charged growth, the subscription revenues have seen an upswing and could end up at an accelerated new normal once the pandemic subsides.

Strong bounce back in FY2022

According to the KPMG report, the M&E sector is expected to bounce back in FY2022 with a growth of 33.1% over FY2021 to reach Rs 1,866 billion, with gaming and digital being the fastest growing segments.

“Assuming the pandemic is under some form of control by the end of FY2021 and businesses learn to operate in the new normal, FY2022 will likely be a bounce-back year for the sector, with a 33% growth projected over FY2021,” KPMG report said.

Print revenue in FY2022 is expected to rise sharply by 57% year on year to Rs 298 billion. However, despite the sharp bounce back, the overall revenue for print in FY2022 will still remain below FY2020 levels of Rs 306 billion.

Digital advertising revenue will see the sharpest 31% year on year growth in FY2020 to Rs 292 billion, higher than both print and television. 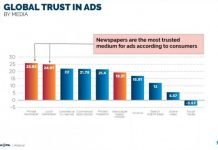 The long and winding roadblock