Pune-based offset printing house, Marleshwar Graphics has recently ventured into digital printing by installing a brand new Canon imagePRESS C650. Marleshwar Graphics, which was established in 2008, till August this year was fully focused on offset printing. However, with short-run volumes rising in recent years, it became imperative for the commercial print service provider to bring in a digital press.

“In recent years we saw the number of short-run jobs increasing at a fast pace. A lot of work we got required us to print less than 200-300 impressions. Also, customers wanted a quick turnaround time. This was not possible with our offset presses and that is why we thought it was time for us to buy a new digital machine, which was commissioned in late-August,” says Kishore Dhavade, owner of Marleshwar Graphics.

Marleshwar Graphics is located in Pune’s printing hub of Shanivar Peth. The new digital press has been installed on a premise that is about 500 square feet in an area where a flex printing machine is also installed. The offset division is located in a separate premise at a short distance from where the digital operations take place. It prints items such as leaflets, brochures, business cards, and danglers, among others.

Offset printing work happens at a premise of about 2,000 square feet where Marleshwar Graphics operates four 4-color offset press – two from Shinohara, one from Komori and one from Ryobi. It also has a fully loaded post-printing section with various finishing equipment which include two Polar cutting machines.

Talking about the reasons for buying a Canon digital press, Dhavade says that his decision was influenced by the fact that a lot of printers in Pune had invested in Canon and the company’s installation base in the city is very impressive.

“There have been a number of Canon presses getting installed in Pune in the past few years and we took a demo of the machine at one of our friend’s shop. And we liked what we saw. The quality was very impressive,” he says.

The imagePRESS C650 prints at 65 pages per minute and is built on the same platform engine as the imagePress C850 Series. It offers two-knife booklet trimmer, a paper folding unit, a document insertion unit, a booklet finisher, a multi-hole punch including creasing and a stapler.

Dhavade says he is satisfied with the performance of the press and expects to increase the print volumes in the next few months. “We are at present printing about 1,000 impressions every day and I am confident of significantly scaling up the volumes in the near future,” he sums up. 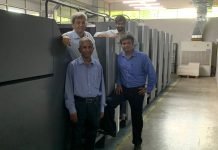