Rajasthan Patrika, a Hindi daily based in Jaipur and a veteran Quark user invested in multiple licenses of QuarkXpress 2018 in December 2018. The company started using the new and enhanced version of the layout software for industrial-strength publishing in May 2019.

Speaking on Patrika’s upgrade, Sagar Sharma, general manager, Rajasthan Patrika, said, “We used QuarkXpress 4.1 before which is a 20-year-old version. We wanted to explore new possibilities since things have changed in Patrika in terms of content, quality of content, advertisement spots, and addition of new software such as GMG Color, a color management and proofing paper software, and Amendo, image editing software. QuarkXpress 4.1 was not compatible with new developments and software. It was obsolete for functions such as image enhancement. It did not support different formats such as PDF, GMG Color and Amendo software which resulted in degradation of image quality during the processing of advertisements or images.”

Sharma explained that QuarkXpress 2018 is very extensive in terms of features and supports the software used by Patrika. “With Quark 4.1 we had several issues in terms of quality, placement of ad and images. It was a massive change for our organization to shift from Quark 4.1 to Quark 2018. The best part about the new software is that the quality of images doesn’t get degraded. With the earlier version, we could only enlarge an image or ad to 40-50% but with the new upgrade, images can be enlarged up to 800% without any distortion and we have practically done it,” Sharma said.

Sharma further explained that the new software has multiple options for story palettes; it allows a user to drag and drop the same content multiple times within the same session. The page makers have the option to choose from different fonts that can be used within the same story. “This feature of Quark 2018 allows us to use our custom Hindi font. For example, we can use the Patrika font. It also allows us to create new fonts with the help of our designers and use them in real-time. It can also be integrated with GMG and Amendo along with Unicode fonts which were not available fully in the older version. Being a Hindi daily, functionality is very important for us, ” Sharma added.

With Quark 2018, the productivity at Patrika has increased tremendously. It has drastically reduced the time required to send an image across Patrika plants by eliminating a series of steps. Earlier, the image and ad files in PDF form had to be converted in TIFF format which was then further enlarged to be passed through Quark 4.1. The content and image files then again had to be changed to PDF format and shared across the Patrika network.

“Converting a file from TIFF to PDF format was a long and painful process. It took a lot of time and degraded the quality of a file immediately as we changed its format. If an ad needs to be published across Patrika, first we receive the file in Jaipur, convert it, and the same image is sent across our network to different Patrika plants to be published. The whole process took 10-15 minutes for a single file. But with Quark 2018, if we receive a PDF file, it can be placed directly in pages. There is no need to convert the file and a small ad can be placed with or without the content.

The file is now easily sent across our network without any issue because the size of the overall image is very small. There is no need for size enlargement; this is something that has drastically improved our performance, Now it just takes 2.5 minutes for a single file,” Sharma affirmed.

Another feature, Flex Layout is an important part of Patrika’s ERP system. The layout can be integrated with QuarkXpress 2018 which was not feasible with the earlier version. All the dummy creations and sizing can be single-handedly prepared on the new software, according to Sharma. 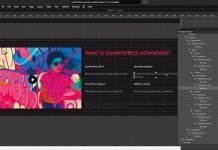