After four days, Fespa’s European flagship event in Munich concluded on a positive note. The Fespa Global Print Expo, with 615 exhibitors and Fespa owned European Sign Expo with 103 exhibitors, has again provided a comprehensive overview of wide-format and industrial signage, POP, decoration and garment production tools. The combined event has been attended by some 20,000 visitors, with a strong presence from Asia, the Middle East and Eastern Europe. Asian manufacturers also continued to dominate the exhibition floor, although the number of exhibiting companies from Asia seems to be on the decline for the past two years as compared to Fespa’s earlier European events. Most likely, this is due to the increased frequency of these events decided four years ago. Of the major Korean press manufacturers, only D.gen had a stand, showcasing its Teleios, Papyrus and Artrix platforms with Ricoh Gen5 printheads mainly for the garment industry.

At the Global Print Expo, exhibitors included around 60 companies based in China, 10 in Korea, 10 in Japan, 4 in India, 2 each from Singapore and Thailand, and of course numerous Asian companies trading under their European reps. At European Sign Expo, another 60 Chinese companies offered laser cutting devices, substrates, and LED components.

Most of the big names in wide-format, industrial and textile printing had new developments on show, whereas some of the multiple-portfolio manufacturers seemed to prefer consolidating their existing equipment range, at least until the next Fespa show or drupa next year.

HP, for instance, had several new substrate developments for signage and POP on show, while limiting printer launches to one dye sublimation press, the HP Stitch S1000, the third in a series initiated at SGIA Expo last year. The 320 cm wide Stitch S1000 can reach speeds of up to 220 square meters an hour, or in backlit mode up to 130 square meters an hour. It can be used with both transfer paper and direct-to-fabric. The other two sublimation models, the Stitch S300 and S500, were on show as well, in addition to the tried-and-tested HP Latex R1000, HP Latex 1500, HP Latex 335, HP Latex 570, HP DesignJet Z9, HP DesignJet Z6810, and HP PageWide XL 8000.

Canon launched the 165 cm wide Océ Colorado 1650 roll-to-roll printer, based on UVgel technology introduced two years ago with the Océ Colorado 1640, with 800 installations worldwide ‒ one of Canon’s most successful printers. The 1650 is capable of UV-LED curing prints with both matt and gloss finishes, and can lay down gloss on a matte stock and matte on a gloss stock. It has the same productivity and image quality as the 1640, printing at 159 square meters an hour at a resolution of 1,800 dpi. Canon also showcased for the first time the Océ Arizona 1380 GT flatbed press, part of the new Arizona 1300 Series launched three months ago. Also at the Canon stand was an Océ Arizona 6170 with High Flow Vacuum for porous substrates such as corrugated board and plywood used in POP, packaging and decoration, as well as the ImagePrograf Pro-2000, a 60 cm wide printer for fine art and photographic prints and particularly outdoor applications such as banners using water-resistant substrates. Demonstrations also included Canon’s software application Océ Arizona Xpert, simplifying and automating complex multi-layered and double-sided print jobs; Océ Touchstone technology for textured surfaces, embossing, metallic accents and raised lettering; and Océ ProCut to complete the company’s end-to-end offerings.

EFI offered a preview of the EFI Pro 30f, a 300 x 200 cm entry- and mid-level flatbed printer to be available by September this year, and capable of printing on substrates up to 10 cm thick. Driven by a Fiery proServer Core front end with FastRIP acceleration and equipped with 12 Ricoh Gen5 UltraDrop printheads, this printer can print in 6 colors (CMYK and double-white) at speeds of up to 210 square meters an hour.

At Fespa, EFI also launched the VUTEk h5 hybrid flatbed/roll-to-roll LED printer as part of it 320 cm wide series printing up to 109 boards per hour in eight colors plus white, and the VUTEk 3r+ LED roll-to-roll printer. A VUTEk FabriVU 340i aqueous soft signage printer could also be found at the EFI stand, as well as VR-demonstrations of the EFI VUTEk HS125 Pro hybrid inkjet press and the single-pass EFI Nozomi C18000 corrugated packaging press.

EFI-partner Kornit showcased its heavy-duty Kornit Atlas for garment decoration with water-based inks, and the Kornit Avalanche Poly Pro for printing on polyester. The Kornit stand included a direct-to-fabric sample area featuring prints from the company’s upcoming Presto system, a solution eliminating the need for pre- and post-treatment of fabric and allowing for high-quality printing on a broad variety of fabric types without consuming water.

Mimaki launched an entry-level JFX200-2513 EX UV flatbed printer for fast on-demand printing in four colors plus white. Mimaki’s commitment to IoT in industrial printing was demonstrated with the launch of IP Job Control software and the announcement of future TA (Textile and Apparel) Job Control, supported by a Universal Robots robot arm at the stand and by charming female models wearing designer dresses printed on Mimaki’s TS55-1800.

On a Mimaki UJF-7151plus printer, the company also showcased its UV-curable metallic ink MUH-100-Si announced a few months ago. MUH-100-Si can place metallic ink directly onto the product without the need for a separate process. Decorative options such as printing both gloss and matte tones, texture effects and full-color metallic expressions can be achieved by overprinting on top of the metallic ink.

Mutoh presented its new 162 cm wide ValueJet 1627MH hybrid inkjet printer, featuring CMYK plus white resin-based inks, enabling printing on a range of rigid and roll substrates. Mutoh also showcased its ValueJet 426UF and ValueJet 626UF direct-to-object UV LED desktop printers. These A3 and A2-size printers allow direct printing on objects of up to 7 and 15 cm thickness with CMYK plus white plus clear inks. They are particularly suited for printing customized promo gifts and a wide variety of personalized products.

Also at the Mutoh stand were the 162 cm wide ValueJet 1638UR roll-to-roll UV LED printer, the PerformanceJet 2508UF flatbed printer with a print bed of 240 x 120 cm, and the 162 cm wide ValueJet 1624X single head and ValueJet 1638X dual head printers, as well as Mutoh cutting plotters in widths between 77 and 190 cm. Mutoh showcased too, its high speed 190 cm wide ValueJet 1948WX dye sublimation printer with speeds between 125 square meters an hour and 195 square meters an hour. For direct-to-textile print applications, including natural fabrics such as cotton, Mutoh presented the 190 cm wide ValueJet 1938TX printer targeted at the sampling of short-run on-demand and local production of garments, upholstery, home textiles and the like.

Ricoh, at its fourth Fespa-appearance, launched a new series of roll-to-roll printers, a flatbed printer, and a direct-to-garment printer, integrating the ColorGate software acquired by Ricoh last year. The Pro L5100 Latex Series with Gen5 printheads was shown in two configurations, CMYK plus white, and 2 x CMYK, running at speeds of up to 46 square meters an hour. The Pro TF6250 UV flatbed printer, sized 250 x 130 cm, is a smaller version of Ricoh’s first flatbed launched last year. The direct-to-garment range has been expanded with the Ri1000, joining the Ri100 and the Ri6000, and a magnetic system on the platen for fast garment loading.

Roland had demonstrations running on two of its latest developments, the VersaUV LEF2-200 UV-LED flatbed printer for printing on rigid and flexible materials of up to 10 cm thickness, and the TrueVIS VG2 series printer/cutters in two sizes, the 162 cm wide VG2-640 and the 135 cm wide VG2-540 with extended gamut capabilities, new TR2 orange ink, and VersaWorks 6 RIP enhanced workflow software. Roland also showcased its VersaUV S-Series UV-LED flatbed printers for printing on substrates and objects up to 20 cm thick and 100 kilograms per square meter in weight; the 8-color VersaExpress RF-640 eco-solvent printer; the Texart RT-640M multi-function dye sublimation printer previewed last year; and the compact LD-80 laser foil decorator for personalization and on-demand application of metallic and holographic foils.

Durst launched two additions to its hybrid P5 industrial printing systems, the 350 cm wide P5 350 and the 210 cm wide P5 210, capable of printing in resolutions of up to 1200 dpi, with multi-track options for up to 6 parallel boards, automatic media width and thickness detection, foldable and smooth-running roller tables, a secure ink refill system, and the possibility to be equipped with peripheral systems for full automation. The company also presented the 250 cm wide P5 250 HS hybrid printing system, unveiled in 2018 and developed further, featuring MEMS printhead technology and running at speeds of up to 600 square meters an hour.

SwissQprint showed its first roll-to-roll printer, the 340 cm wide Karibu, which will be available from September this year. The Karibu shown at Fespa works with special inks, and features fast setup between different substrates, a lightbox for quality control of backlit prints, and an integrated Mesh Kit facility for direct-to-mesh printing without having to clean the print bed.

The cutting, creasing and POP-making tables

Second to printing output devices, cutting tables have taken an ever-increasing space at Fespa. Esko and Zünd are confronted with competition from a growing number of Korean, Chinese and other manufacturers. Belgian manufacturer Summa, for instance, launched its 335 x 140 cm L3214 laser cutter with speeds of up to 400 square meters an hour and automatic, camera-controlled substrate-feeding.

Esko presented a new Kongsberg C Edge digital cutting table with speeds of up to 75 meters a minute, and a motorized roll feeder for soft-sign applications. The upgradable Kongsberg C Edge is complemented with a range of customizable fittings, including a conveyor feed system, a new Fast Tool Adapter to reduce downtime and maximize performance, a heavy-duty unit for high quality corrugated crease lines, and the CorruSpeed tool, a non-oscillating device for high quality cutting even at high production speeds.

The Motorized Roll Feeder facilitates rolls up to 300 kg/666 lbs with a maximum outer diameter of 470 mm/18.5 inches, producing large jobs even when they extend beyond the work area of the cutting table. Eliminating inaccurate cuts on soft signage jobs due to wrinkles, stretch distortion or imperfectly rewound rolls, the feeder avoids stretch by actively feeding the material to the cutting table, rather than pulling it. A dancer bar provides the correct tension with adjustable weights and an active edge correction allows for a steady straight feed, even if the roll is imperfectly rewound after printing. A spreader roll is also incorporated as a final checkpoint to smooth out any remaining wrinkles for precise finishing of soft signage jobs. Esko also demonstrated the latest version of its integrated design and prepress workflow software, the Esko Software Platform 18.1.

Zünd was present at Fespa with three cutting systems, the D3, the G3, and the S3, focusing on new tools developed for these series. A Zünd D3 dual-beam cutter provided an idea of maximum process productivity. A G3 system geared at the textile industry was shown cutting textile rolls of up to 320 cm wide. The S3 was equipped with an Over Cutter Camera OCC, automatically capturing the position of the materials to be cut and any distortions that may have occurred, before starting to cut. Demonstrations at the Zünd stand also included the Zünd Cut Center ZCC workflow application and high-speed registration system, and the RM-L routing system for heavy-duty materials with the automatic tool changer ARC, with which router-bit handling can be turned into a fully automated process. 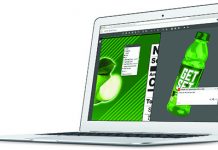 Esko donates software licenses to more than 40 US schools 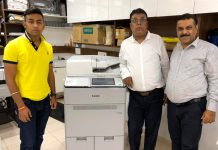 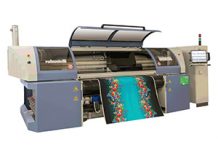 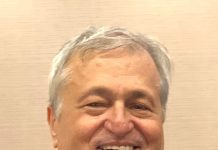 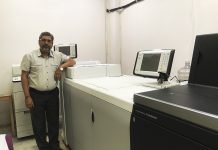 Epson and Konica Minolta in signage, POP and textile show