McClatchy, the second-largest publisher of newspapers in the United States by circulation, has voluntarily filed for bankruptcy protection under the country’s Chapter 11 law on 13 February 2020. The Sacramento-based publisher listed on the New York Stock Exchange and each of its 53 wholly-owned subsidiaries filed their voluntary Chapter 11 petitions in the U.S. Bankruptcy Court for the Southern District of New York. The group has received US$ 50 million (approximately Rs. 350 crore) debtor-in-possession financing from Encina Business Credit, which, combined with normal operating cash flows, will provide enough cash for the company, to continue to function.

Begun in 1857 with a 4-page paper in Sacramento, that ultimately became The Sacramento Bee, McClatchy publishes the Miami Herald, The Kansas City Star, The Charlotte Observer, The (Raleigh) News & Observer, and the Fort Worth Star-Telegram among many other newspapers across 14 states.

McClatchy expects Q4 revenues of US$ 183.9 million, down 14% from the same quarter in the previous year. According to business media reports, its 2019 revenue is expected to be 12.1% lower than the previous year – the sixth consecutive year of declining revenues.

The company’s 30 local newsrooms are expected to continue to operate while it pursues approval of a debt restructuring plan with its secured lenders, bondholders, and the Pension Benefit Guaranty Corporation. According to the company’s press release, the company aims to emerge from this process in the next few months.

The restructuring plan would allow McClatchy to reorganize it’s over US$ 700 million debt, with 60% of the obligation being eliminated under the plan according to a McClatchy story. If okayed by the court, the plan would give control of the company to New Jersey-based hedge fund Chatham Asset Management. The new owners, led by Chatham, would run it as a privately held company, so its shares would not be traded on the NYSE American stock exchange. The company is beginning the process of being delisted, the story said.

“McClatchy’s plan provides a resolution to legacy debt and pension obligations while maximizing outcomes for customers and other stakeholders,” said Craig Forman, president, and chief executive officer in the company’s press release. “When local media suffers in the face of industry challenges, communities suffer: polarization grows, civic connections fray and borrowing costs rise for local governments. We are moving with speed and focus to benefit all our stakeholders and our communities.”

“McClatchy remains a strong operating company with an enduring commitment to independent journalism that spans five generations of my family,’” commented Kevin McClatchy, chairman of McClatchy’s Board of Directors and great-great grandson of the company’s founder, James McClatchy. “This restructuring is a necessary and positive step forward for the business, and the entire Board of Directors has made great efforts to ensure the company is able to operate as usual throughout this process.”

The press release adds, “McClatchy has made significant progress in its digital transformation in the past three years. As the second-largest US local newspaper company, McClatchy has grown its digital-only subscriptions by almost 50% year over year and is now roughly evenly balanced between total audience and advertising revenues, with digital accounting for 40% of those revenues and growing, a much healthier distribution for an increasingly digital era. The Company has more than 200,000 digital-only subscribers and well over 500,000 paid digital customer relationships. 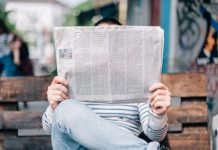 INMA report – Where advertising goes next for news media