New Delhi-based Gurudwara Rakab Ganj Sahib recently installed a Heidelberg Speedmaster CS 92 4-color sheetfed offset press. The press runs with solvent-free inks as the use of alcohol is banned within the Gurudwara run by the Delhi Sikh Gurudwara Management Committee (DSGMC), which has exclusive permission to print the Guru Granth Sahib, the religious scripture of Sikhism.

The DSGMC and the Golden Temple in Amritsar are the only two bodies authorized to publish Gurmat Literature, the holy scripture, and other religious texts. The DSGMC also prints calendars, sacred books, diaries, and material following a strict ethical code. These texts are then supplied to various Gurudwaras across the country and the world.

“The Gurudwara used to do a double-pass on its 2-color press for multicolor printing. The printing speed of the new press is 15,000 sheets an hour. It is also integrated with Heidelberg’s Prinect workflow tool to make the operations simple and intuitive. The new press can print on substrates of varying thickness from 0.03mm to 0.6mm,” says Deepak Walia, regional sales manager at Heidelberg India.

The Gurudwara prints a limited number of copies daily. Each week, the Gurudwara prints a small quantity. Since the print volumes are relatively low, it outsources the plate-making work to a Delhi-based pre-press bureau and does not have a dedicated pre-press setup. The binding work is done manually due to the constraints on using alcohol-based glues in automatic binding machines. However, the Gurudwara uses Heidelberg folding and cutting equipment.

“The Heidelberg press enhances overall print quality and productivity, with quicker make-readies and turn-arounds. We are excited to print Sri Guru Granth Sahib on a world-class press. The move to digital empowers cost-effective, and high-volume printing,” says Sirsa.

“The new offset press is a valuable asset to assist the shift from conventional and monochrome press operations to highly-automated, full volume, color printing. Waste optimization is a bonus. With the CS-92, we look forward to setting new benchmarks in productivity and performance,” says Kalka. 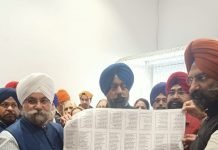