After his graduation, Azad moved the business to Chandigarh. He saw a sudden increase in business within a couple of years. In 1974, under the government’s scheme to improve the state of offset printing in India, Azad was sent to Germany as part of the 13-member group from India to receive rigorous training in printing. Azad received training from Polygraph, the manufacturer of Planeta printing presses in erstwhile East Germany. On his return from Germany, Azad purchased a Planeta 22 x 32 inch offset printing press.

Recently, Azad purchased a second-hand Heidelberg Speedmaster 102, 28 x 40 inch 4-color offset press. Apart from this, Azad owns two Dominant presses and a single-color Roland 28 x 40 inch offset press. “We have invested close to Rs 3 crores in this unit. The cut-throat competition in Chandigarh has reduced the margins to a large extent. There is sheer overcapacity in the city and the print runs are coming down. Also, in such a scenario we have to keep a close watch on our expenses,” says Azad.

Azad has so far never bought a brand new printing press. The machines purchased by Azad are mostly a decade old. “A Rs 4 to 5 crore machine will surely give me higher productivity but at the same time, the market doesn’t give me enough money to be able to afford that machine.

“With these used machines, my productivity goes down by 25%, but one has to consider production only when the demand is on a equivalent scale. The rates will anyway remain the same. If I’m able to service customers with a second-hand printing press pretty efficiently, I don’t see a reason in investing more money in a brand new one,” Azad explains.

Azad says that Chandigarh has close to 150 printing presses in the city whereas the demand is not enough for these printers to be able to sustain businesses. He says that a slowdown in the market pegged with the increase in short runs is eating up the commercial printing market. For short-run printing Azad has purchased a Xerox 550 13 x 19 inch production printer.

“So far, we have not thought about investing more in the digital technology. Somewhere in back of our minds, we do have plans but we will assess the situation closely as always before taking any further step. For one, we will not invest in any printing equipment this year,” Azad shares.

Azad feels that the demand for print advertising has declined sharply. He says, “Inflation in the market has a huge role to play in demand. Print is no more an effective media for advertising. We used to have at least 50 advertisers in our customer base, which has now reduced sharply to 5 customers only. We are able to survive only because of our quality and timely service.”

Azad invests in a second-hand Mark Andy for labels

Six months ago, Azad purchased a second-hand 8-color Mark Andy narrow web flexo label press. Labels, he feels, is a segment that will grow along with the growth in packaging. “We bought the machine which originally costs nearly Rs. 4 crores for just Rs 80 lakhs. Currently, we print close to 2 lakh labels daily. Nevertheless, we have not been able to penetrate this segment as much as we had anticipated. There are a number of label printers in Baddi and they have the major share of the market in this region. We have invested in the Mark Andy only to be able to survive in the market as the demand for commercial print is down,” Azad adds.

The second-hand Mark Andy is capable of printing at least 10 lakh labels a day according to Azad but his company is not able to utilize the machine’s capability fully for lack of demand. The press has foiling and embossing capability as well. “If and when we’re lucky, we use this machine twice in a week. With this pace, it will take some time for us to get the ROI on this label press,” Azad concludes. 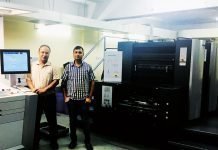 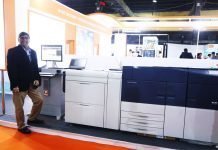 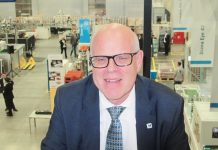 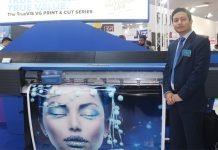