Twenty-year-old Tarun Kapoor started his career at Super Multi Color press as a field boy. After learning the printing techniques at SMC, Kapoor took to freelancing projects. Printing was a mere medium of earning money for him back in his early days but with time, he developed a huge interest in printing which became his new-found love. “Printing has grown on me so much that I ended up loving it. I have a passion of becoming the biggest printer in North India. At the age of 29, my dream right now is to buy a brand new, fully loaded and top-of-the-line Heidelberg press,” says Kapoor who has set up a new printing unit by the name GK Printers in Chandigarh.

GK has two divisions within its business – one for offset printing and the other for digital printing. The company owns a second-hand 5-color Heidelberg press, one 2-color and a single-color press. Apart from the offset presses, it also owns a brand new Xerox V180 digital press. Kapoor says that he didn’t take any loan from the bank for purchasing either the offset or the digital presses. The offset presses are run in double shifts while the digital press runs for 10 hours a day. GK has ideas about adding value to print with some of the new coatings that are available and has plans to invest in a double-color UV drip-off offset press.

Commenting on the decline in commercial print, Kapoor says, “I believe that commercial printing is a huge segment and it can never cease to be fruitful. One must, however, be extremely cautious and smart while operating in this segment. On the one hand, people say that commercial printing is on a decline, but I feel otherwise. I’m running my press in double shifts which clearly signifies that there is plenty of demand in the market. So much so, that the press is running for 22 hours a day.”

It has not been an easy path and there were plenty of hiccups when Kapoor started his business. His 5-color Heidelberg arrived almost six months late and then it took the technician three months to install the press and make it fully functional. All this while, Kapoor was getting restless with each passing day as he had employed an entire workforce and was paying them regularly for doing nothing.

Kapoor does not deny his intention of entering the packaging segment at some point in the future. With a Heidelberg press, a lamination machine and a die-cutter, Kapoor says he can start monocartons right away but he doesn’t want to clutter his business at an early stage with printing and packaging without the proper equipment.

“For entering the packaging segment, I feel I should invest at least Rs. 20 crores (US$ 3 million) plus I don’t want to operate with second-hand equipment for packaging. Because that is one segment where quality is the most sought after. If and when I begin my packaging business, it will be for monocartons and with investment in the right kind of machines,” he adds. Kapoor’s intention, once he begins packaging, is to supply through eCommerce platforms.

On a monthly basis, the Heidelberg 5-color press produces between 15 and 20 lakh impressions. “You must also know that this is a 25-year-old machine. Sure, we have experienced many breakdowns but I should not complain considering the age of the press.

“A 25-year-old press is still running like a horse on a daily basis printing the quantity that it is. I must say that Heidelberg has grown on me a lot in these last two years. My next investment is also going to be a Heidelberg. It may also have to be a second-hand press as we do not have the capacity to buy a brand new one right now,” Kapoor concludes. 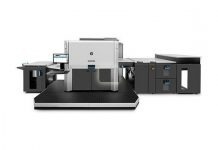