The Bombay Master Printers’ Association (BMPA) organized an impact session in the evening of 4 April for its members at the Sunville Banquets in central Mumbai business district of Worli. The knowledge sharing exercise saw experts talking about topics such as GST, labor laws, importance of good electricity management and food safety. The event was supported by Kotak Mahindra Bank and Toyo Ink.

Pathik Shah, partner at BP Shah & Co. and a chartered account by profession, spoke about the various amendments that have taken place in the GST and have come into effect recently. Some of the amendments he threw light upon were verification of application for grant of new registration and scheme of 6% for supplier of service under which GST council has now decided to provide a benefit of composition scheme to service providers also. The threshold limit of turnover in the preceding financial year would be Rs 50 lakh for supplier of services or mixed suppliers with a tax rate of 6% (3% CGST + 3% SGST). There will be liability of filing one annual return with paying taxes on quarterly basis with a prescribed declaration.

Shah also spoke about the Input Tax Credit related changes, amendments in eWay bill and MVAT amnesty scheme. Elaborating on the MVAT amnesty scheme, he said that the scheme will enable the taxpayers to settle tax disputes before the Goods and Services Tax (GST) came into effect. This is aimed at recovering the revenue that the government was losing due to litigation and clearing backlog of cases.

Hiral Chheda of Chheda Management Consultants enlightened the delegates about the recent Supreme Court ruling on allowances and provident fund. The Supreme Court has taken the view that universally paid allowances would be treated as part of ‘basic wages’ for the purpose of provident fund payments. This ruling can have a significant financial impact on organizations, since it lays to rest a long-standing controversy as to which components of pay are amenable to PF contributions, Chheda said.

He also spoke about changes in Employee State Insurance Act 1948, the Maternity Benefit Act 1971 and Payment of Bonus Act 1965.

Correct power management is vital for the life and longevity of printing and related machines. Sridhar of Online System dwelled on this very topic and spoke about the role of active voltage conditioners, UPS systems and various other power management systems that printers can utilize to keep their equipment safe and productive.

Finally, the event came to a close with a presentation by the team of Toyo Ink on the topic of safe packaging and food safe inks. The team talked about various regulations that are in place globally, types of migration and the impending FSSAI regulation that will come into effect in July this year. 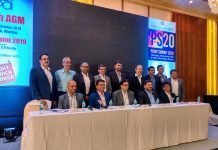