Vinay Kaushal began the press conference on the day before the Printpack show by saying, “Printpack has been a lucky show for us starting from 2015, where we participated with 156 square meters, to our 250 square meter stand in 2017. And now at this show we have an even bigger stand of 385 square meters.

“From July 2012, in a span of 6 years, we have moved up as one of the most trusted machinery suppliers and, according to me, we hold the top position in customer service support. At every edition of Printpack, we have been showing new breakthrough technology through live demonstrations – be it the first LED UV machine in 2015 or the Multi wave LED UV lamp in 2017.

“Starting from today, we will give a demo on all the products on offer from us in this Printpack. The importance of the Indian print market should be understood from the fact that we have with us 23 top and senior executives representing several Japanese companies that we represent.

“In the last 5 years, we have successfully sold and installed 70 RMGT presses across India and have reached a stable market share of around 20%. This year, despite tough economic situation, we were able to ship 16 presses so far with more coming in before the financial year ends on 31 March.”

At its stand, Provin is showcasing an RMGT 920 ST 6-color plus coater UV press and the Miyakoshi intermittent narrow web hybrid press – the MLP13C. It has five offset units and two flexo units. Both presses will run with UV Energy’s Multi wave LED UV curing systems which can cure conventional UV ink and varnishes.

Kaushal went on to make an announcement of Provin’s new joint venture project in collaboration with Japan’s Techno Roll, saying, “In our constant pursuit to provide high-quality solutions to the Indian printing industry, we are pleased to announce our association with Techno Roll Japan for manufacturing of high-quality PU and NBR rollers for all types of printing machines for the Indian market. We are setting up a joint venture company with Techno Roll Japan under the name of Techno Roll-Provin India Pvt. Ltd. We expect the new company to be operational by October 2019, subject to all government clearances.”

Established in 1979, Techno Roll Co. Ltd., Japan has five manufacturing units in Japan and various licencees across the world. Techno Roll is an OEM supplier to many reputed printing machinery manufacturers in Japan and other parts of the world. Kaushal introduced Eeji Asao, president, Eeji Horrike, manager, International Sales, and Santosh, International Sales and Kaibara, assistant manager, Technical, R&D department of Techno Roll who will be at Printpack throughout the show.

Kaushal also revealed that Provin and RMGT will be showcasing a new technology that they will put into action in India for servicing and maintenance of offset presses. He explained, “We are also pleased to showcase for the first time in India, a unique service concept called ‘Smart Glass.’ This unique innovation was introduced by RMGT during IGAS 2018 last year and India becomes the first country outside Japan where this will now be implemented. With the implementation of this system, our customers will be able to get real-time service support by getting connected to our service support server using the device. The device is capable of transferring live feed with data transfer and on-the-spot notes, and advice can be given by the back-end engineer who may be sitting in Japan, based on the feed given from the site.”

At Provin’s stand there is another new technology – a smart concept mechanical pile turner from Edics System in Japan. Kaushal added, “Edics built this system and holds a patent for the design. This space-saving, easy-to-operate pile turning system can be very useful for Indian customers.”

In answer to a couple of questions from the trade journalists present, Kaushal said that the joint venture rubber roller plant will be in the Delhi-NCR and that its initial annual capacity will be for manufacturing 20,000 PU and NBR rubber rollers. 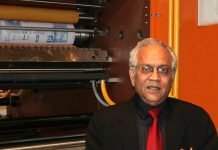