Pune-based Pratham Technologies has notched up good deals during the first two days of Printpack 2019, and the company expects to close the show with deals close to Rs 2 crores.

The company has managed to close deals for all the products on display except the outsert folding machine. According to Desai, if the company manages to book a deal for the outsert machine at the show, then final sales figure may go above Rs 2 crore as well.

Finally, talking about the response the company got on the first two days of the show, he says, “Printpack has always been a very good show for us, and the 2019 edition has also begun on a positive note for us. We are very satisfied with the response we have got in the first three days.” 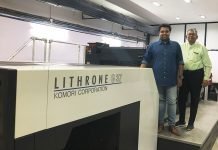