“In the photobook industry, we at Konica Minolta India have been able to sustain good growth both in the number of presses sold and in number of output (or clicks) as far as the photo print volumes are concerned. We have gone beyond the metro cities such as the B, C and D towns now. These conventional photographic imaging customers are slowly moving to the digital segment and along with this change our machines being well accepted,” says Ashok Sethi, general manager – Sales PPDC/IDC, Konica Minolta Business Solutions. Also at the stand were Konica Minolta India’s managing director Daisuke Mori and Manish Gupta, the company’s national marketing manager.

As far as the print volumes are concerned, the company has witnessed 12 to 15% growth and the numbers are similar on the machine units. Konica Minolta offers the High-Chroma series of machines to the photo book industry. Earlier it was the 70hc, then the company graduated to 71hc and now the latest machines by Konica Minolta for the photo book industry are the 73hc and 83hc.

The AccurioPress C83hc is the latest machine which is best suited to customers with high print volumes who can print as many as 100 to 150 albums per day. Launched in late 2018, the C83hc from Konica Minolta costs nearly 20% more than C73hc. So far, it has reached about a half dozen installations across the country.

Full choice for the photobook segment

Earlier the company offered only the C71hc, now it offers three machines in that segment with an output of 71 ppm and 81ppm – the C71hc, C73hc, C83hc. “When we talk about the photo book market and all the three machines combined, we have an installation base of nearly 650 machines so far. We have still not fazed the 70hc machine either – these older machines are also still running. We still use the same technology for the machines but over a period of time the toners have changed, including some improvements on the imaging end and productivity.

“Talking about improvements on the imaging end, we don’t mean the resolution of the machine, as it remains the same. In terms of ensuring the quality of the imaging, certain parameters within the machine have changed over the years. We have a better understanding about the customer requirements. We also have a new color calibration unit – IQ501,” says Manish Gupta, national marketing manager – PP & IP at Konica Minolta Business Solutions.

The new IQ501 color management unit ensures the quality of every print in the machine. The basic purpose of this unit is to ensure quality standards, color and image-to-image registration. It is equipped with two scanners and a color array which ensure that the sheet-to-sheet color and image registration are accurate. It can also be linked to Konica Minolta’s cloud-based color management solution. The IQ501 unit takes some space so although it can be retrofitted on the older Accurio digital presses, printers have to make sure that they have the space for it fit between the print and delivery unit of the machine.

As far as the new B2 inkjet press that Konica Minolta has installed at its first customer in Chennai, Gupta says, “The KM1 is doing good. We are going a tad slower on that probably to understand the Indian perspective, the challenges and the applications of the machine. The KM1 uses a different technology – UV inkjet. In the Indian context in terms of where we can position those applications and the different kinds of media on which can be used on the machine are some of the initial challenges that we are facing and daily solving,” Gupta says.

Daisuke Mori, managing director of Konica Minolta India added that the company believes that it is still in the investment stage as far as the machine is concerned. “Since this is the start of a new product line, the company plans to invest more depending upon the business the machine generates. We are not strictly looking at the profitability angle at this beginning stage,” says Mori. 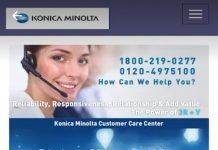 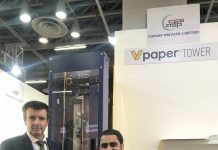 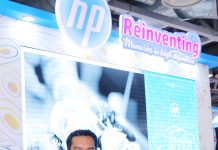 A sold out Media Expo 2018 opens in Mumbai