Ten of India’s biggest media companies, who claim that they collectively reach 70% of India’s online audience, announced on 22 September 2018, a new group or collective called the Digital News Publishers Association. The organization says it is committed to providing the most credible news in all languages to the Indian audience, to self-regulation and to promoting the business and editorial interests of all members.

At this point, one can only wonder if one of the intentions or purposes of the new association is to take on Google and Facebook for a better revenue share, but the WAN-IFRA conference in Hyderabad should be a good place to question some of the founders whether this is the case. However, don’t hold your breath for a straight answer, which could be an answer in itself.

Stating that the digital media space in India is growing exponentially, the group says that the DNPA has been formed to find ways to cooperate in maximizing the current and future potential of the industry. The 10 founding members of the DPA are – Dainik Bhaskar, India Today Group, NDTV, Hindustan Times, Indian Express, Times of India, Amar Ujala, Dainik Jagran, Eenadu and Malayala Manorama. The DNPA is self-funded with a nominal joining fee contribution from each publishing house. The organization says it is open to any online news publisher and that all memberships will be cleared by the board, although no criteria have been given at this time. 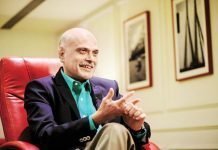