ColorJet India has recorded the highest sales of its UV digital printers at Media Expo 2018, New Delhi, among the several exhibitions the company has attended till date. The sales at Media Expo were led by its Verve Hybrid UV flatbed/roll-to-roll printer, which was launched at Media Expo for the first time.

The Verve Hybrid is capable of being a flatbed printer as well as a roll-to-roll printer. It can print media of 3200 x 2000 mm in flatbed size and 3200 mm in roll form. The printer is equipped with V8 processor, which delivers unmatched printing quality at lightning fast speed.

The Verve Hybrid is equipped with unique UV LED lamps, has a precisely calibrated wavelength, delivers emboss effect and long lasting quality. In the event of a breakdown, the carriage in the Verve Hybrid starts from the same place, as against the carriage moving back to its original position in case of conventional printers. This results in savings in inks, production time and wastage of media.

“The ColorJet team is very happy with the overwhelming response received during the Expo, especially for our UV printers. In fact, we have recorded the highest number of UV printer sales, particularly of Verve Hybrid during the show. This kind of response gives us an immense confidence to go more beyond expectations,” he added. 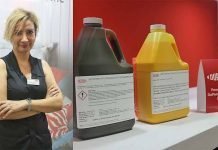