Newsprint prices that were benign in 2017 have been inching up in 2018, although not at the rate claimed by newspaper and magazine owners who seem to think that since they own the media they can say anything even if it is not absolutely correct merely to dramatise the situation and their so-called plight. The indicative prices in November 2017 for 45 gsm newsprint per kilogram as collected by our research associates in Ipp-Star (www.ippstar.org) were: Khanna Papers Rs. 38; Rama from Rs. 32 to Rs. 34; and Emami Rs. 35 per kilogram. The current indicative prices as collected on 21 May 2018 were: Khanna Papers Rs. 49 (an increase of 28.9%); Rama from Rs. 39 to Rs. 41 (an increase of 21.2%); and Emami from Rs. 44 to 45 (an increase of 28.6%).

The overall increase in the six months from November 2017 of 26.23% is a significant hike for an industry that does not charge a rational cover price for newspapers, although it is not as much as the 40% claimed in Indian media headlines. Publishers are acknowledging that they have only themselves to blame since their daily cover prices varying from Rs. 3 to Rs. 10 are much lower than those in Sri Lanka, Pakistan and Bangladesh, which are around Rs. 15.

As we have written numerous times over the last 40 years, the key problem is the lack of an Indian government forest policy that encourages managed forests and productive harvesting. Based on appropriate tree species for the purpose of creating watersheds and carbon sinks, managed forest could easily be paid for by forest industries such as lumber and papermaking apart from the savings generated by hydroelectric power generation and the production of clean and potable drinking water.

In the meantime, the scarcity of fiber has made it very uneconomical to produce newsprint in India. Increasingly, the newsprint capacity is either idle or being turned into higher prices papers. Newsprint consumption is above 3 million tons a year according to IppStar. Annual newsprint import is in the region of 1.8 million tons.

While various reasons for the rise in the price of newsprint are being given, including Trump’s anti-dumping duty against Canadian mills at the behest of a single US supplier, and that of the Chinese changing their policy of being the largest waste paper processor in the world, the actual fact is the rise of pulp prices and the better value addition
offered by bleached and coated writing papers and boards in comparison to standard newsprint.

Almost a million tons of newsprint capacity closed in 2017. Industry insiders expect more machines to shut down and more than half the profits of integrated forest and paper companies are coming not from paper but from pulp, plywood and bio-diesel. China has also become a net importer of newsprint and Australia, which has become a major supplier of newsprint to India, has seen major producers such as Norske Skog convert a newsprint machine to LWC production as far back as 2014.

In February we warned that paper prices were likely to move up in India with the hardening of pulp and hardwood, prices which had risen US$ 240 a ton in the previous six months. With the import customs duty at nil since May 2012, the industry currently imports about 1.25 million tons of pulp for paper making. Indians and their newspaper and paper industries are suffering from the lack of managed forestry, the low price of printed products of which newspapers are lowest and worst, and finally from the inability to collect and process waste. This is a real shame for a forest fiber-short country that cannot manage to even collect its used paper for recycling.
– Naresh Khanna, editor@ippgroup.in 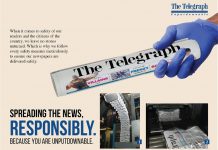 Zero incidents of COVID-19 being transmitted through print