The shortlist for The London Book Fair International Excellence Awards 2018 has been announced, with Brazil leading the way with five nominations, closely followed by USA with four, and a record-high 27 countries represented overall.

The awards, which are held in partnership with the UK Publishers Association (PA) and sponsored by Hytex, celebrate excellence in seventeen categories, including international publishing, bookselling, academic and scholarly publishing, children’s publishing, literary translation and digital innovation. In each award category, the judging panel was comprised of experts in that sector.

Retailers from across the world are nominated for the  Bookstore of the Year Award, sponsored by Gardners, with Carturesti (Romania), Timbooktoo (Gambia) and The Uppsala English Bookshop (Sweden) all shortlisted.

Brazil (5), USA (4), Canada (2), Australia (2), Poland (2) and the MF Baltics countries Lithuania (5), Latvia (5) and Estonia (3) all received multiple entries. Gambia is represented for the first time in the award’s five-year history, for  Bookstore of the Year, sponsored by Gardners.

Jacks Thomas, director, The London Book Fair said,  “It is fantastic to see 27 countries represented in the 2018 International Excellence Awards shortlist, a record-high in the awards five-year history which I think highlights the growth, breadth and diversity of these awards and the global book industry showcased at The London Book Fair. The impressive developments of the industry are illustrated by the fantastic achievements of all the nominees—their determination and passion to bring books to a wider audience through their initiatives is inspiring.  I’m delighted to welcome the shortlistees to The London Book Fair in April to give them a platform to showcase their success.”

Stephen Lotinga, chief executive, The Publishers Association  said,  “We are proud to support The London Book Fair International Excellence Awards. This is a brilliant shortlist that exemplifies the global nature of the publishing industry. It’s great to see audiobook publishers now represented with their own award and to see excellence across the industry highlighted and celebrated through these awards.”

The winners of several other Awards will also be presented on the night, including The Simon Master’s Chairman Award, The Market Focus Baltics Cultural and Literary Initiative Award, The Association for Publishing Education (APE) Student Awards and The LBF Trailblazer Awards.
The London Book Fair Lifetime Achievement Award will also be presented at the ceremony.
The LBF International Excellence Awards ceremony is an invitation-only event, and takes place on 10 April 2018 in The Conference Centre, Olympia, London. 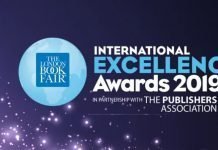