Ad tech firms  Rezonence  and  Smartology,  along with   The Smithsonian, become the first associate members of the World Media Group as it celebrates its 20th anniversary in 2018.
World Media Group is a strategic alliance of organisations who are committed to promoting journalism and role of international media. It comprises of global media brands – The Washington Post, the Wall Street Journal, Time, The New York Times, National Geographic, Newsweek, Forbes, Fortune, The Economist and Bloomberg Media Group.

Since the World Media Group’s inception, the media world has changed beyond recognition and the group has constantly striven to reflect the needs and shape of the marketplace. The change in membership policy reflects the continual drive and is in recognition of the value the associate members have in the creation and consumption of quality journalism – either by having the same high standards of journalism or by providing ad tech services that promote and support quality journalism and trusted media environments.

Emma Winchurch-Beale, international sales director at The Washington Post and president of the World Media Group, says: “In a volatile world besmirched by fake news, the World Media Group’s role as the champion for quality journalism is more important than ever if we want to retain consumer trust. That’s why, as we celebrate our 20th anniversary, we are opening up membership to organisations that have the same goals and ethics as us and can help us extend our campaign for excellence in delivery as well.”

This would be the third time that the World Media Group hosts the World Media Awards. These awards celebrate excellence and effectiveness in cross-platform, cross-border, content-driven advertising and the organisers are particularly keen to receive more entries from across India this year.

The World Media Group has grown over the years to a staggering reach around the world. Across all member publications, the group has received over 180 Pulitzer Prizes, 1,029 journalism and content awards and, according to the Ipsos Affluent Europe Survey 2017, 68% of all C-suite professionals in Europe with 50 plus employees worldwide consume a WMG brand every month.

To mark its 20th  Anniversary the World Media Group will be hosting a party in July. “Twenty years is a long time in media so we are incredibly proud that we have not only stayed the course but grown in stature and relevance. That’s definitely something to celebrate,” she adds. 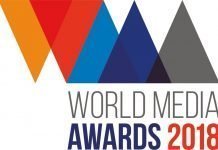