The Bombay Master Printers Association’s Print Summit, took place on 17 January at the Nehru Centre at Worli in Mumbai. Leading printers from Mumbai and Pune took part at the new venue for 12th edition of the annual event. The event saw the introduction of the AIFMP-CRISIL Index to help the industry track its costs in a scientific manner.

The Print Summit 2018 opened with keynote address by renowned educationist Indu Shahani, speaking of her journey in the field of education and how she quit a cushy corporate job for a career in education. Saying that her new career was driven not only by passion but also by compassion, Sahani noted that just like other occupations, the print industry too is transient, and should change with the times. She also encouraged the print industry to encourage entrepreneurship.

Puneet Datta of Canon spoke about the peaceful coexistence of offset and digital printing. He said that while there is no argument that both technologies will co-exist, digital print will gradually gain market share but with offset retaining its dominance in the foreseeable future. According to Datta, individualization will be the biggest driver for digital technology, “Digital is all about customization, individualization and personalization.”

He said that outside forces such as new technology, social media and big data will further squeeze the current model of competing on price. Citing research data, Datta said that in the decade ending 2020 overall printing volume will decline but that it will grow in value due to the rising requirement for higher value digital production. Nevertheless, Datta cautioned printers to think through all the implications of change and adaptation before venturing into the digital arena. A new mindset will be needed to fully utilize the potential of digital technology and newer entrants need to think through the pre-press workflow, with a view to buying the right digital front end, and appropriate finishing solutions as well as investing in the right talent.

The pre-lunch session came to an end with the presentation titled HUV-LED UV by Thomas Glasser of Siegwerk touching on the benefits of the technology such as quick drying of ink and faster turnaround times. Application of HUV/LED UV are ubiquitous and can be seen in flyers, brochures, inserts, cards and posters, while in the packaging segment, in mould labels already use LED UV low migration systems with other packaging applications gradually adopting the new curing technology.

Post-lunch session
The post-lunch session opened with a talk by Hirofumi Hoshino of Komori who threw some light on Kaizen in the press room. Highlighting inefficiencies in the pressroom, he revealed that the press is not in operation 50% of the working hour and produces for only one third of the available time. The main reasons for this are machine condition, color mismatch and operator skill.

He said that overall equipment effectiveness (OEE) can bring benefits. Following the Japanese principle 5S, a company can focus on its OEE. The 5S stands for Seiri, Seiton, Seiso, Seiketsu and Shitsuke or Sort, Set in Order, Shine, Standardize and Sustain. He summed up by saying that the ROI of print can be improved by reviewing the pressroom, maintaining good condition of the press and working environment and changing the operator’s mindset.

Tony Massey of Innerworkings spoke about the print aggregators and their impact on the print industry. Saying that the print management market is in an unprecedented state of transition, print’s place in modern marketing campaigns is transforming, competing with other channels while print brokers are striving to remain relevant by offering expanded services. He also stated that there is a growing rift between distributors and print suppliers who feel they have been pushed to the brink on price.

Massey summarized by saying that there are pros and cons when dealing with print aggregators and printers will need to take a call on the benefits. The post-lunch session was wrapped up by Thomas Glasser, who in his second presentation, talked about ink migration for food packaging.

Final session
The last session saw two very interesting presentations by Amit Shah of Spectrum Scan and Paul Bradley of UK-based ESP Colour. Shah enthralled the audience with his presentation titled ‘Value Addition – They Way Forward.’ He said that India’s growing middle class of more than 500 million people will drive the growth in print, but they are now demanding value. He advised printers to create needs rather than go for need-based supply and to do more market research. “Instead of being a supplier become a solution provider and offer extra services without customer asking for it. Most printers are stuck in a rut and that is why printing is now a commoditized sector.”

Shah suggested that printers should be ready to deal with print buying agencies as they are now a reality; that they should be experimental and use a variety of substrates and processes, look to exports and focus on the Indian eCommerce industry which is growing very rapidly. “Get rid of your pessimism, printing is a sunrise industry,” Shah said in conclusion.

Finally, Bradley of ESP Colour talked about how ESP managed to inject efficiency to become one of the most efficient print companies in the world. He said that the focus should be on maintaining a level of efficiency with minimum amount of investment. Printers need to change according to changing markets; they need to automate their way of dealing with clients in terms of quotations, orders and supply. 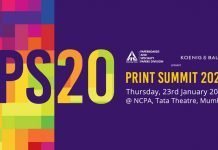 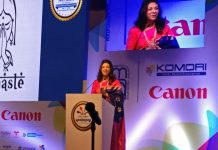