There are more than a dozen Indian web offset press manufacturers—all of whom produce two broadsheet pages wide by a single page in circumference (2 x 1) presses for both domestic consumption and exports. The exception is Manugraph which, apart from being one of the largest manufacturers of 2 x 1 presses globally, also manufactures a 4 x 1 press. Recent news suggests that the majority of the web offset press manufacturers including Manugraph, TPH, Prakash, Pressline, KK Printing, NBG, Sigmarq, HM Web and Naph Graphics have a reasonable to good number of orders on hand after a flat or negative performance over the past three years.

The past three years have been a struggle with two of the better known press manufacturers closing their factories for various reasons. Demonetization and GST did hurt newspaper ad revenues and depressed the market for new presses. Moreover, it also cannot be denied that amongst some of the predominantly family owned press manufacturers, succession issues persist. The past year also saw a 4-month strike at Manugraph but the company is now back in production at a good clip with orders through a good part of the next year.

Web offset manufacturers in the Delhi/NCR (Faridabad and Noida) and in Kohlapur are busy again with towers and folders for newspaper and book presses. Insiders say that about 50 book presses mainly consisting of a single 4-Hi tower and a folder are currently on order for delivery in the next six months. Apart from these, some new newspaper presses in 5- and 6-tower configurations continue to roll out while there is also a significant demand for additional towers for presslines already in the field.

Naph Graphics
A recent visit to Naph Graphics’ two plants in Noida and Greater Noida revealed that the company has just delivered two 6-tower plus folder press lines to a newspaper in Nepal. The company, which operates on an extremely lean basis by combining its own machining and assembly with components outsourced from reliable suppliers, is generally busy producing a combination of newspaper towers and book presses with quality design features that allow for increased automation options.

The 546 mm cut-off continues to dominate the newspaper lines while in the book industry, the cut-off oscillates between 508 and 578 mm. Naph’s book presses are generally supplied with the company’s own manufactured and extremely economical log-stacker. In fact, the log-stacker is often used by book printers with other web offset machines.

Naph produces extremely compact 4-Hi towers containing a reelstand below—all within a height of 14 feet. The press design is based on diagonally staggered cylinders for a short web path with improved positive web traction for superior registration on successive blanket couples. Its book presses have one of the fastest quarter folders available without compromising the overall press speed. A double parallel 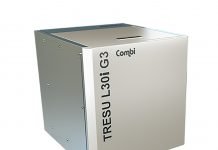 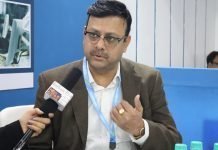