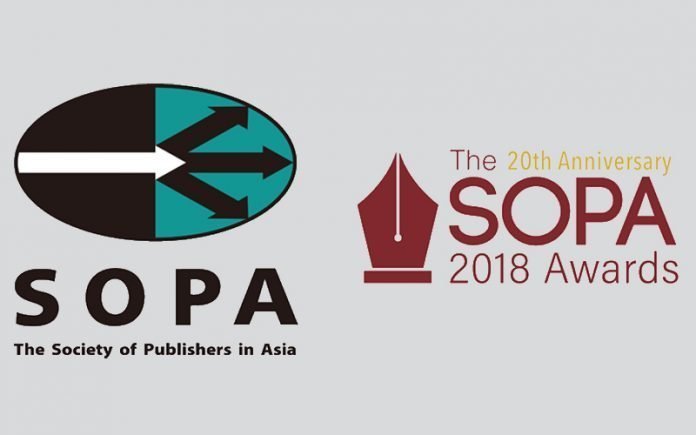 The Society of Publishers in Asia (SOPA), a Hong Kong based not-for-profit organization dedicated to pursuing excellence in journalism, announced that the SOPA 2018 Awards for Editorial Excellence are now open for entries. The deadline for submissions is 3 p.m. Hong Kong time on 31 January 2018.

The coming awards will mark the 20th anniversary of the annual SOPA Awards. Since their launch in 1999, the awards have become a world-class benchmark to recognize the best practices in journalism in Asia Pacific, while driving journalistic innovation across international, regional and local media platforms in the region.

“The evolution of journalism over the past 20 years has been substantial. From digital news to visual journalism, the media landscape keeps changing and many major developments back then are increasingly the norm now. SOPA feels pleased about its contribution in driving the dialogue,” said SK Witcher, news editor for the International Edition of The New York Times and chair of the SOPA Editorial Committee. “By recognizing the best practices, we hope to keep inspiring journalistic innovation and excellence in all shapes and forms.”

SOPA Award for Public Service Journalism
As part of that effort, the 2018 awards have also evolved. Instead of recognizing an individual journalist’s contribution through a ‘Journalist of the Year’ award, SOPA’s top honor from 2018 will be the ‘SOPA Award for Public Service Journalism,’ honoring outstanding journalistic work by individuals or teams of journalists that represent an exemplary contribution to public service in the Asia-Pacific region. This new award will accept both Chinese- and English-language work in print, photography, video or online media. In addition, the award for Excellence in Lifestyle Coverage is now called Excellence in Arts & Culture Reporting, honoring the work that demonstrates high standards of reporting and writing in fine arts and cultural topics, including food and travel.

“This fine-tuning of SOPA’s top award reflects an effort to put renewed emphasis on the role that the press plays in serving the interests of the public. No matter how our industry evolves, bringing information that matters to various communities will continue to be core to our profession,” said Witcher.

For the SOPA 2018 Awards, media will compete in 17 categories including SOPA Award for Public Service Journalism, Excellence in Business Reporting and Excellence in Feature Writing. SOPA encourages entries from both large and small publications with entries classified by circulation and language type – English or Chinese. Winners of the 2017 Awards were selected from more than 750 submissions, a record number.

The judging panel for the awards comprises more than 100 media professionals from some of the region’s most influential media, along with academics from a number of Asia’s leading journalism schools. The Journalism & Media Studies Centre of the University of Hong Kong is the Awards Administrator for the 8th consecutive year. For the purposes of the awards, Asia Pacific is defined to include Afghanistan and the Central Asia republics, the Indian subcontinent, North and East Asia, South-East Asia and Australia, New Zealand and the South Pacific Islands.

Submissions can be made online at www.sopawards.com. The award finalists will be announced in May 2018, with the winners named at the SOPA Awards Gala Dinner on 13 June 2018, at the Hong Kong Convention and Exhibition Centre. Award submission eligibility and application information is available at www.sopawards.com.

About SOPA
The Society of Publishers in Asia (SOPA) was founded in 1982 to champion freedom of the press, promote excellence in journalism and endorse best practices for all local and regional publishing platforms in the Asia-Pacific region. SOPA is a not-for-profit organization based in Hong Kong and representing international, regional and local media companies across Asia. The Society of Publishers in Asia is also host to the prestigious annual SOPA Awards for Editorial Excellence, which serve as the world-class benchmark for quality journalism in the region. For details, visit, www.sopasia.com