“Earlier this year, we went to see the demo of the printer at another Ricoh customer’s establishment in Mahim. We were highly impressed with its performance and with the quality of jobs we saw it producing so we placed the order. The printer was then installed in September,” says Vinayak of Leepee.

The Ricoh Pro C5100 series was launched in July 2013 and is aimed at customers with light to moderate print volumes. The Ricoh Pro C5100s/C5110s prints documents with up to 1200 x 4800 dpi image resolution for industrial high-quality print results. The printer features Vertical Cavity Surface Emitting Laser (VCSEL) technology for precise reproductions. It emits laser beams to adjust to sheet expansion and contraction, which minimize color shift and produces up to 80 color prints per minute for impressive throughput in any environment.

Although it has been just a few months since the Ricoh was installed, Leepee has received positive feedback from its customers, says Vinayak. The print shop caters only to corporate clients and has brands such as Raychem RPG, Aristo Pharma, Trident Electric, Veto Switchgear India, and Ganga Pharma, amongst others as its customers.

Further modernization planned
Leepee plans to again modernize its print technology assets early next year. According to Vinayak, the plan is to bring in the Ricoh Pro C5200s series by May or June of 2018 and to replace the two Xerox Docucolor printers. “We will get rid of the two old Xerox printers and make way for the Ricoh Pro C5200s early next year. We also plan to buy a half cutting machine and a full cutting machine,” shares Vinayak. 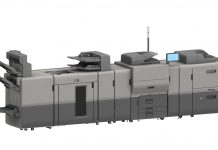