It got a rousing welcome from students at the Northern Regional Institute of Printing Technology (NRIPT) where a visit to Pamex by the institute’s final year students was mooted. A Print Yatra then moved to Varanasi where it was greeted by the Varanasi Offset Printers Association.

On its visit to the iconic Geeta Press on 14 November, a tumultuous welcome awaited the Print Yatra from the Gorakhpur Printers Welfare Association (GPWA). The general secretary of GPWA presented shawls and bouquets to the Yatra team.

The Yatra moved to Kanpur on15 November. Chopra accompanied by the Lucknow printers arrived at the function organized by the Kanpur Press Owners Association (KPOA). Avdesh Awasthi, president of the association, greeted the team with fruit baskets. Welcoming the delegation, Dinesh Barsia, general secretary, KPOA assured a large presence from Kanpur at the exhibition. A discussion on GST was followed by a presentation on PAMEX. 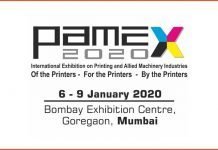 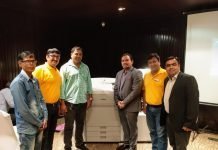 Pamex 2017 opens on a positive note with strong attendance

Fujiflim will promote its Jet Press 720S press at Pamex 2017